We have been working on the revamp of Raiven’s room, my goal is to give her a room that fits now and will work for her until she leaves for college…..*sigh*.  I always have ideas in my head and the reality of the real space is usually different than what was in my head.

Raiven has this bedding set by Isaac Mizrahi for Target

I bought it about 4 years ago and she still loves it, so this is the color pallet for most of the room; bright pink, white, yellow, and maybe some red.

First we have to cover these dark blue/gray walls that we my choice for the walls when it was an office but it is too dark for a room on the lowest floor even with daylight windows.

It took 3! yes 3 coats of our almost white color paint, we even bought the paint with the primer in it.  Light versus dark, it is a hard battle, but like all good stories we won.  I also enlisted the help of some of my favorite employees:

Jon than taped all the lines for our vertical stripes, he has the patient for this…me not so much.

Here was the vision:  light silver metallic stripes that were not heavy maybe even just caught a glimmer in the sun.  Reality:  the paint dried super fast and was much darker than we thought.  Instantly I called the stripes to a halt and had a glass of wine (after the kids were in bed) and thought about the stripes.  It was not what I had pictured but we actually decided we really liked them.  What we did was paint them on only one wall instead of the whole room, which was the original thought with the more understated stripes we had planned.   Here is where we are:

In my best Violetn Femmes voice: ” Let me go onnnn like I glitter in the sun Let me go ooooonnnnn”

You can see some of the variations incolor in the stripes from our intial painting that I halted.  This paint has to go on fast and even, it dries almost instantly, I really like the way it looks now.  I think it looks more like real metal with some color variation. 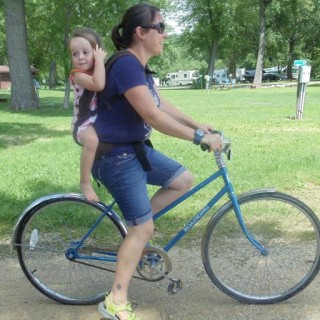